Figure 1. Schematic view of the heterostructure

Figure 2(a). Variation of the band diagram with the bias

Figure 2(b). Variation of the carrier concentrations with the bias

Figure 2(c). Variation of SQW profile with the bias

Figure 2(d). Variation of emission spectra with the bias

Band diagrams, and distributions of carrier concentrations and recombination rates in the LED structure. It is seen that electrons are uniformly distributed over different QWs. In contrast, holes are injected mainly into the QW adjacent to the p-AlGaN emitter. Computations predict that the hole distribution over the QWs becomes much more uniform if the lightly doped barriers are employed in the LED structure. This is due to a lower carrier recombination rate (a higher diffusion length) in the active region directly controlled by the electron concentration. You can find detailed discussion of MQW heterostructure for blue LED in the article by V.F. Mymrin, K.A. Bulashevich, N.I. Podolskaya, I.A. Zhmakin, S.Yu. Karpov, and Yu.N. Makarov “Modelling study of MQW LED operation”, phys. stat. sol. (c) 2, 2928-2931 (2005) 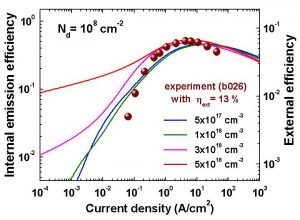