Bandgap Engineering Superlattice Simulation Tool (BESST) is a package for simulation of optoelectronic devices based on group-III nitride superlattices. Short-period superlattices (SPSLs) serve as important elements of a device heterostructure design, aimed at solving either technological or some design problems. In the case of III-nitrides, the SPSLs are used either for reduction of dislocation density in epitaxial materials, enhancement of Mg acceptor activation, increase of hole injection efficiency or even as n- and p-emitters and active regions in light emitting diodes and laser diodes. To employ the advantages of SPSLs, it is necessary to know their electric and optical properties as a function of SPSL parameters—thicknesses and compositions of the constituent layers. The BESST package allows calculating of individual SPSL properties as well as modeling of band diagram and carrier transport in a device structure consisted of a sequence of different p- and n-doped SPSL regions. The light emission spectra from such a device are also predicted.

Simulation of the whole device at given bias by self-consistent solution of Poisson and Schrodinger equations coupled with carrier transport equations.

The above information forms a good basis for deeper insight in operation of SL based devices and helps to optimize the parameters of individual SLs as well as their interconnection.

The developed approach is a self-consistent solution of the Poisson and Schrodinger equations modified for the case of SL based heterostructure coupled with carrier transport equations.

Band diagram is calculated by the Poisson equation:

High acceptor ionization energy in AlGaN alloys and, therefore, low conductivity of p-type layers is well known problem of nitride devices. Mg-doped GaN/AlxGa1-xN SLs were shown to have higher hole concentrations than AlGaN layers of the same average composition due to valence band modulation. However, the hole concentration is strongly dependent on the structural parameters of SLs. Calculations made within the BESST package shows excellent agreement with the experimental data.

Recently, UV LEDs of various designs employing p-n junctions between different SPSLs have been demonstrated. In particular, it has been shown that the use of an i-SPSL active region with a wider quantum wells between the n- and p-doped SPSL claddings increases the emission intensity compared to an LED consisting of the n- and p-SPSLs only. Actually, such a p-i-n LED operates like a conventional double heterostructure (DHS) device. Indeed, the bandgap of the SPSL with wider quantum wells is lower than those of the claddings, producing better carrier localization inside the active region and, hence, a higher internal emission efficiency.

The band diagram and carrier concentration distributions in the p-n and p-i-n Al0.1Ga0.9N/AlN SPSL LEDs are shown above. The barrier widths in all the SPSLs are 1 nm, while the QW width is 1 nm in the DHS active region and 0.5 nm in the n- and p-claddings. The impurity concentration of 1×1019 cm-3 is taken in both n- and p-regions.

Band diagrams illustrate a close similarity between the SPSL based devices and their bulk prototypes. The effective surface charges are formed at the interfaces of the DHS active region where the mean electric field is directed opposite to the built-in field of the p-n junction. Such behavior is typical to conventional single-quantum well (SQW) InGaN LED heterostructures with polarization charges on the SQW interfaces. In the case of p-n SPSL junction, no effective surface charges are observed due to the equal macroscopic polarizations in both n- and p-SPSLs. Thus, the p-n SPSL LED is quite similar to ordinary p-n junction diode.

These results clearly demonstrate the potential of the bandgap engineering in such SPSL-LED heterostructures and the BESST package can be very helpful in optimization of these structures. 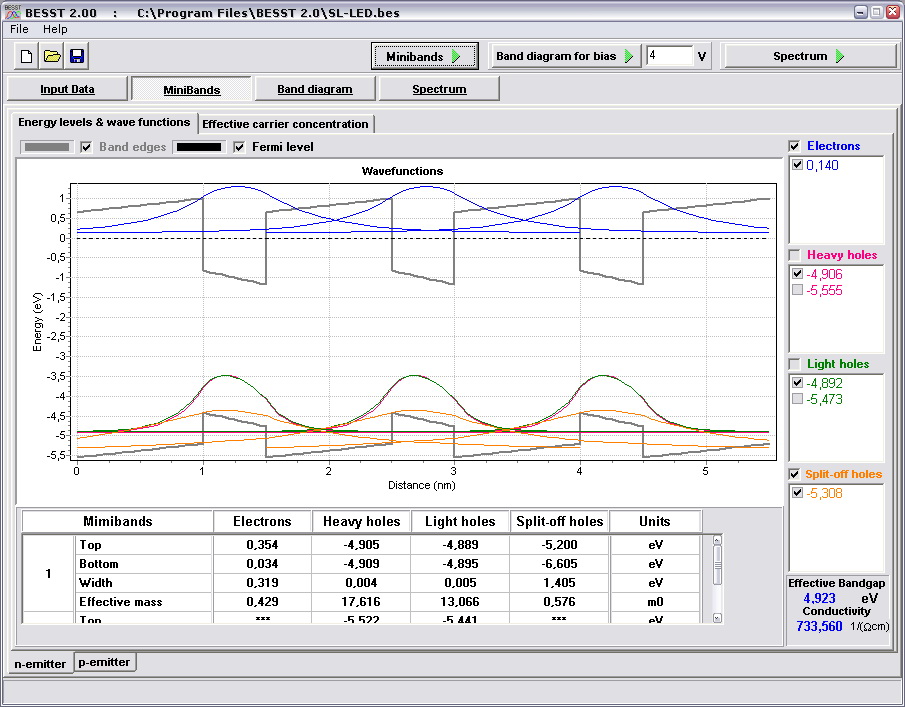 Electronic structure of SL. Wavefunctions of each miniband can be turned on/off by the respective checkbox. The key parameters of minibands are collected in the table below