Accurate modeling of SiC powder charge evolution is very important in PVT of SiC as the changes in the source affect the pattern of the material supply to the growing crystal and composition of the gas phase. VR-PVT SiC performs conjugate simulation of heat transfer, chemical reactions in the powder, multi-component diffusion and flow through the spatially non-uniform porous media, making it possible to reproduce different patterns of the powder charge evolution (right) and its effect on the overall growth process. 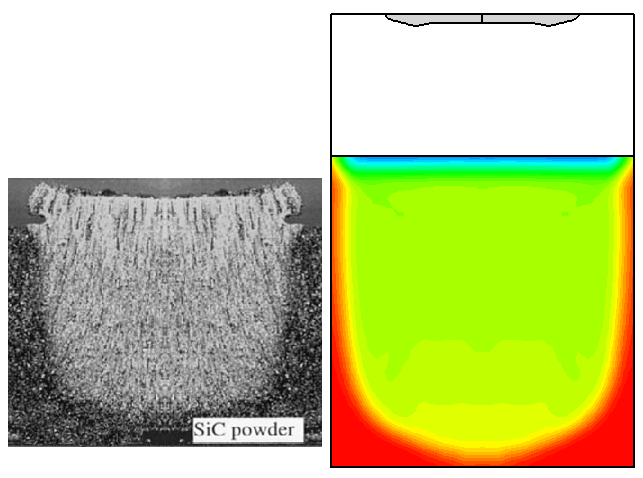 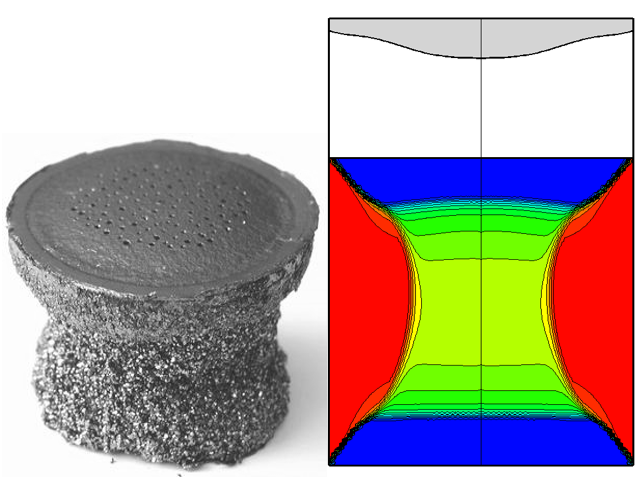 Non-stoichiometric evaporation of the powder in the areas with the highest temperature makes SiC granules smaller and results in their graphitization. Evaporated material can travel out of the powder or re-crystallize on the granules in the colder area, usually, near the powder top. These processes increase non-uniformity of the powder composition and density, which affects its physical properties, most importantly, permeability and thermal conductivity. The change in thermal conductivity may result in a considerable re-distribution of the thermal field in the crucible. Since the change in the powder porosity is usually very pronounced and directly affecting permeability to diffusion and convective flows, one should expect dramatic change in the structure of the mass transport pathways within the powder charge over the course of long term SiC growth. With this in mind, we would like to emphasize the importance of coupled simulation of all of these processes for predictive modeling.

The computations shown below illustrate intensive powder sublimation near the crucible bottom, i.e. in the high-temperature zone. Some part of the evaporated reactive species reaches the relatively cold regions (usually near the top of the charge) where supersaturated vapor species condense on the granule surfaces. Here, the granule diameter rises and the porosity decreases re-directing the path of the outward flow feeding the growing crystal.